The second MICROPROD Policy Dialogue was held virtually on March 18, 2021. This policy dialogue was framed broadly around the first preliminary evidence of how COVID-19 has affected productivity at the firm level, with a focus on country data from Germany, France and Italy. The event’s central themes included the ‘cleansing effect’ that arises from COVID-19 impact, the sectoral and regional heterogeneity of its impact, and the effect of government support on firms.

The event was chaired by Maria Demertzis, Deputy Director at Bruegel, who was joined by a consortium of researchers from various universities partners of MICROPROD, including Filippo di Mauro, Chairman of CompNet, Steffen Müller, Coordinator of MICROPROD and Professor, Otto von Guericke University Magdeburg and Head, Department of Structural Change and Productivity at the Halle Institute for Economic Research (IWH), Agnès Bénassy-Quéré, chief economist at the French Treasury and Member of the board at Bruegel, and Carlo Altomonte, Professor of Economics of European Integration at the Social and Political Sciences Department of Bocconi University, Non-Resident Fellow at Bruegel.

Filippo di Mauro opened the discussion introducing a conceptual framework to understand the first year of Covid-19 backed-up with some first results on productivity across the globe. He discussed the different effects of Covid-19 splitting the analysis between within- and between-firms productivity effects: while the former appear to be negative (e.g. firm losing efficiency reflecting in higher costs because of anti-Covid measures), the latter are positive and partially offset the negative within-form productivity effects (UK data). Filippo introduced this entry-exit effect as the ‘cleansing effect’ that maintains aggregate productivity. Looking at US data, interestingly, Filippo showed that positive and encouraging business formation trend is present (net entry effect) – even though, uncertainty about how this will be sustained and boost future productivity growth remains. Filippo finally commented that the overall disruptions of COVID-19 on global value chains and productivity have been minimal.

Zooming in on specific country data, Steffen Müller examined the ‘cleansing effect’ in more detail, aided by some early observations in German microdata. Steffen illustrated the productivity gradient in firms that were strongly affected (Hospitality 65%; Other personal services 48%; Education 46%) and those that were closer to market exit (12%): low productivity firms are hit hardest and are closer to market exit. Steffen then paralleled this with the take-up of government support schemes, which were mostly requested and obtained by low productivity firms, underscoring the importance of government financial support to hardest-hit firms in the short run.

This was followed by Agnès Bénassy-Quéré, who presented the French evidence on this topic, supported by the results of a microsimulation exercise that was carried out in the framework of the Coeuré Committee. The microsimulation model used was based on simulation of the income statements and balance sheets between March and December 2020 of initially solvent firms over time (1.8 million firms). As COVID-19 prompted activity shocks within the firms, the simulation illustrated how government support has successfully halved the number of newly insolvent firms. Agnès additionally elucidated the heterogeneity of COVID-19 impact across different sectors and firm-sizes in France, and the neutrality of government support on firm productivity (public support does not distort the distribution in favour of more/less productive firms). As regards the cleansing effect, Agnes analyses that it is less effective as in ordinary times (i.e. no COVID-19).

Carlo Altomonte then presented the case of Italy, which was seen to be similar to the German one. Carlo expressed strong concerns about the irreversible effects of the ‘external shocks’ of COVID-19 on the HORECA industry in Italy, which is differently widespread in the country. These external shocks relate to the costs associated with social distancing measures and health protocols. He stated that these external shocks would lead to more regional disparities within the EU. Complementing this argument, regional evidence from Italy also revealed that areas that were exposed to external shocks were more likely to have defaulting firms, with possible longer-term structural consequences. Carlo then also examined the phasing out of COVID-19 subsidies taking as case study the more than a million Italian SMEs, calling for the postponement of short-term work schemes (500,000+ jobs at stake) similarly to Germany while restoring the profitability of existing firms and adjust on the labour dimension in a later stage.

Participation from audience brought more discussion on the mitigative effects of COVID-19 (firms being digitalized and acceleration of the digitalisation process), the Dutch case of the voluntary exit of non-bankrupt firms, the key role of uncertainty on productivity and net number of firms, and the potential beneficial impact of the cleansing effect for competition.

Assessing the impact of COVID-19 on productivity is critical in ensuring that the recovery will be balanced and sustainable. The dialogue overall produced several ideas for further consideration about the heterogeneity of the COVID-19 impact. Indeed, this is not the last word on this complex subject, and the experts panel looked forward to organising more sessions to discuss this in the near future.

The real price of capital explained in new MICROPROD video 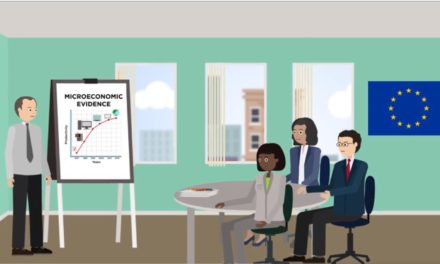